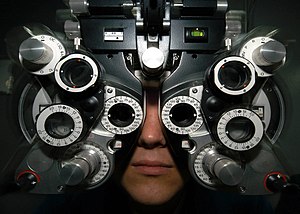 I’m writing to thank Dr Irwin Azman for doing what three other doctors couldn’t—make it possible for me to wear my lenses again.

My eyes have always been sensitive, but with the help of a sympathetic optometrist, I had managed to wear lenses until I turned 43, when my contacts became increasingly uncomfortable.

My ophthalmologist told me my eyes’ tear quality had deteriorated with the onset of middle age; he prescribed artificial tears. These gave me relief for a while, but a year later my eyes were more irritated than ever. This time, he simply said I had GPC and prescribed medication (which didn’t help). He was stumped.

I called my optometrist, who switched me to ProClear Compatibles, which provoked the condition more. I tried a second ophthalmologist; he said I could try switching from lens to lens, but suggested my contact-wearing days might be over. By this time, I was wearing glasses and feeling miserable (my high prescription is very noticeable). Finally, I did a Google search under “dry eye” and Dr Irwin Azman came up.

When I called Azman Eye Care, the receptionist said you’d phone me to discuss my problem. That impressed me, but not as much as when I received a call from you later that day from Florida, where you were on vacation! I was encouraged by your patience in listening, and your confidence that you could help.

On the first visit, I was thrilled to hear, “Well, here clearly is the problem.” You not only had more knowledge than the other doctors I’d seen, but you also had equipment useful for assessing my condition; for example, a machine that took a photo of my corneal cells and a video screen magnifier allowing you (and me) to see the problem in large view.

Following the visit, my eyes soon felt well enough to wear the lenses you prescribed. My eyes felt great for the first time in years. And your concern about my case, calling to see how I was doing (the first eye doctor in 33 years of wearing lenses to do that), and taking time to answer every question, was much appreciated, and a great contrast to the other doctors who simply said, “I don’t know.”

Because of you, I feel confident again about my appearance when I go to a business meeting. I appreciate your encouragement and proactive approach—but most of all, the expertise that put me back in my lenses again! I know two people who have dry eye problems, and I have recommended them to you and have told almost everyone I know about how you succeeded where others have failed. Many thanks!

Dr. Irwin Azman
Dr. Irwin Azman, a highly skilled and experienced doctor, maintains a contact lens specialty practice since 1977. With an expertise in the "hard to fit" patient, including Keratoconus who've been told they could not wear contacts.